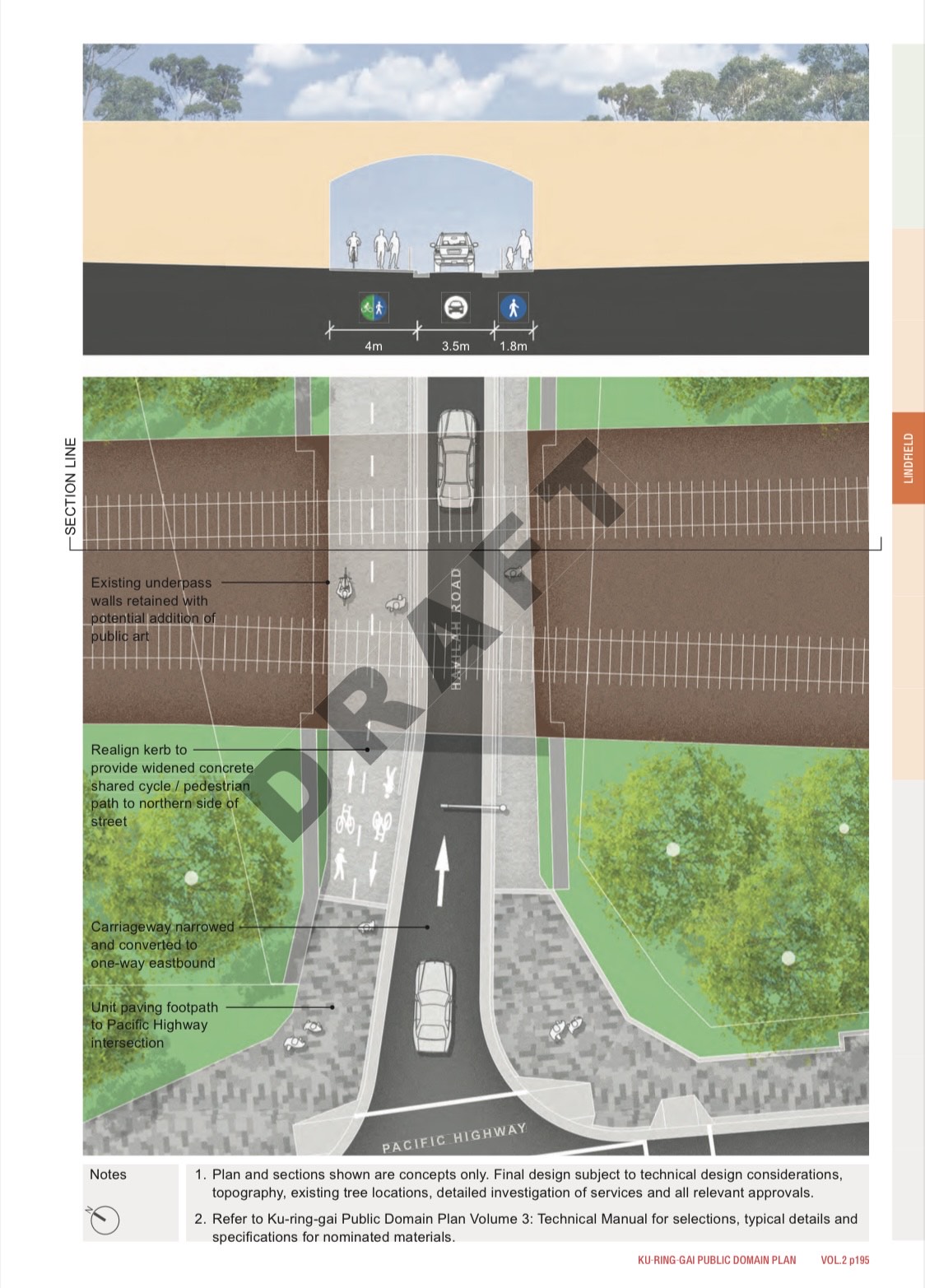 Many residents have contacted councillors in the past week with objections to council staff’s proposed plans to remove the westbound lane of the Havilah Underpass and replace it with a cycleway.

I will answer the most frequently asked questions below.

If the westbound lane is removed, how will we get to Coles, to Holy Family, to Highfields, to West Lindfield and beyond?

In addition to the removal of the westbound lane in Havilah, traffic lights will be installed at the intersection of Strickland Avenue and Pacific Highway. The staff (most who don’t live locally) believe that this will be sufficient to offset the loss of westbound Havilah, however as a local resident who knows just how bad both Havilah and Strickland can get even in the current state, my gut feel is that the proposed changes won’t be enough to allow effective flow and will have unintended consequences (especially at the intersection of Strickland and Lindfield Ave). This is also the view of many other residents that I talk to.

In the future residents on the East side wanting to head North on Pacific Highway via traffic light, there will only be four options. Roseville’s Clanville, Lindfield’s Strickland, Killara’s Lorne, and Gordon’s St Johns.

Has there been any statistics or modelling of traffic at these intersecitons?

There was a 2014 report on traffic in the Lindfield Town Centre. If you look at pages 34, 36 and 38 of the report, it indicates that Pacific x Balfour was one of the worst intersections and required attention. I think it’s important to note here that the study is nearly 7 years old and that traffic conditions are arguably worse today.

In the five years from 2010-2015 there were 23 recorded crashes, 5 of which involved vehicles turning right from Balfour and conflicting with pedestrians.

In the five years from 2015 to 2020 there were 5 recorded crashes, 1 of which involved vehicles turning right from Balfour and conflicting with pedestrians.

Sometime between 2013 and 2016, Transport for NSW installed a no right turn light at this intersection and this appears to have reduced the number of pedestrian collisions.

Why is the performance of this intersection so bad?

Local residents know that it’s because there are cautious drivers who want to turn right but don’t want to creep into the middle of the intersection to allow the vehicles behind them to go straight or turn left. This causes unnecessary holdups and worsens the performance of the intersection.

What are Transport for NSW’s priorities?

Transport for NSW prioritises the overall network performance of state roads and generally holds these with higher regard than traffic issues at local roads. I’ve previously presented sensible solutions / requests to them about other network performance or safety issues at intersections such as Archbold x Boundary, Pacific x Clanville, Lady Game x Delhi, Boundary in front of the Roseville Chase shops and on each occasion the focus of non-local staff is on state road performance without understanding whether reasonable adjustments can lead to overall better state and local road performance.

With regard to the Lindfield Town Centre, their priority is the performance of Pacific Highway so a simplified version of their logic is that if we add a traffic light at Strickland, something else has to go (i.e. Havilah). Hence Transport for NSW has been in discussions with Council Staff about the possibility of turning Havilah into one way.

Having said that, the Havilah one lane is only one of many options and I think it’s reasonable to say that there may be other solutions that improve State and Local network performance without severely compromising the Pacific Highway. One such suggestion by local residents as well as our State MP Jonathan O’Dea (in his submission to the public domain plan) was to leave Havilah Underpass as two lanes of traffic with a no right turn onto Pacific during peak. With the no right turn in place, the flow of traffic from the East will be much smoother and without significantly impacting the performance of the Pacific Highway (in fact it may improve Pacific Highway performance as we won’t have cars unnecessarily going south to Strickland and then driving back up North on the highway towards Coles / Holy Family / Highfields). I haven’t seen any evidence that this suggestion from residents and our State MP has been seriously considered or modelled vs. the one way design.

What about widening the underpass to three lanes?

The railway bridge and the underpass is a state government asset so it requires state government funding to widen. If you look at the structure it’s obviously quite an expensive project. I asked our State MP (again) about this last week and due to the cost-benefit of such a proposal along with the significant needs elsewhere in NSW, it’s not a current priority.

We are, however, getting pedestrian lifts at Roseville and Killara Station and so that’s something that we can appreciate.

Right turn green lights only work if you have two lanes of traffic heading out. With the current arrangement we only have one lane of traffic out and we cannot create space for a second lane of traffic out without significantly reducing the pedestrian walkways, relocating traffic light and streetlighting poles, having to redo the support structures of the railway bridge, etc. It’s an expensive exercise for limited benefit (and the no right turn during peak sign would be much more cost effective).

Will Councillors move a Notice of Motion for a cost-benefit analysis of a pedestrian tunnel?

What I plan to do with this is to instead raise a Question with Notice and have the answers published in the July or August council papers. Council staff are required to answer Questions with Notice, whereas a similar Notice of Motion will be subject to councillor vote and will likely fail.

I will ask council staff for a high level cost-benefit analysis and let’s see what answer they come up with.

My gut feel is that it’s going to be very expensive and we won’t have any way of realistically funding it. Council (when going down its current resolved path) has found it challenging to deliver things like the Lindfield Village Hub and a Pedestrian Bridge, so if those are already a challenge to fund then a properly built 90m pedestrian tunnel even more so.

What’s this that I hear about Transport for NSW prioritising pedestrians and cycleways over vehicles?

Link to the document below. My gut feel is that the document is simplistic, a bit ambiguous, and can lead to interesting interpretations and outcomes.

I’m a cyclist and I think this plan is crazy.

I agree, I’m a cyclist as well and I think it’s perfectly fine to use the road on this occasion if it means we can retain two lanes.

Why are we in this situation where significant changes are made to town centre plans without extensive consultation with the public?

My personal view is that when significant changes like this are proposed ($24m plan to revamp Turramurra, Gordon and Lindfield), residents should be notified by mail and invited to provide feedback.

When I ask council staff about sending out notifications by mail, the general message is that notifying residents by mail is expensive and not required. Instead the preference is to rely on council’s email newsletter and advertisements in the North Shore Times.

I don’t agree with this approach, and I also think it’s inconsistent with the Ku-ring-gai Community Consultation Plan adopted by Council in November 2020. The community consultation plan will need to be reviewed to remove any ambiguities. Refer to the attached pictures for more information.