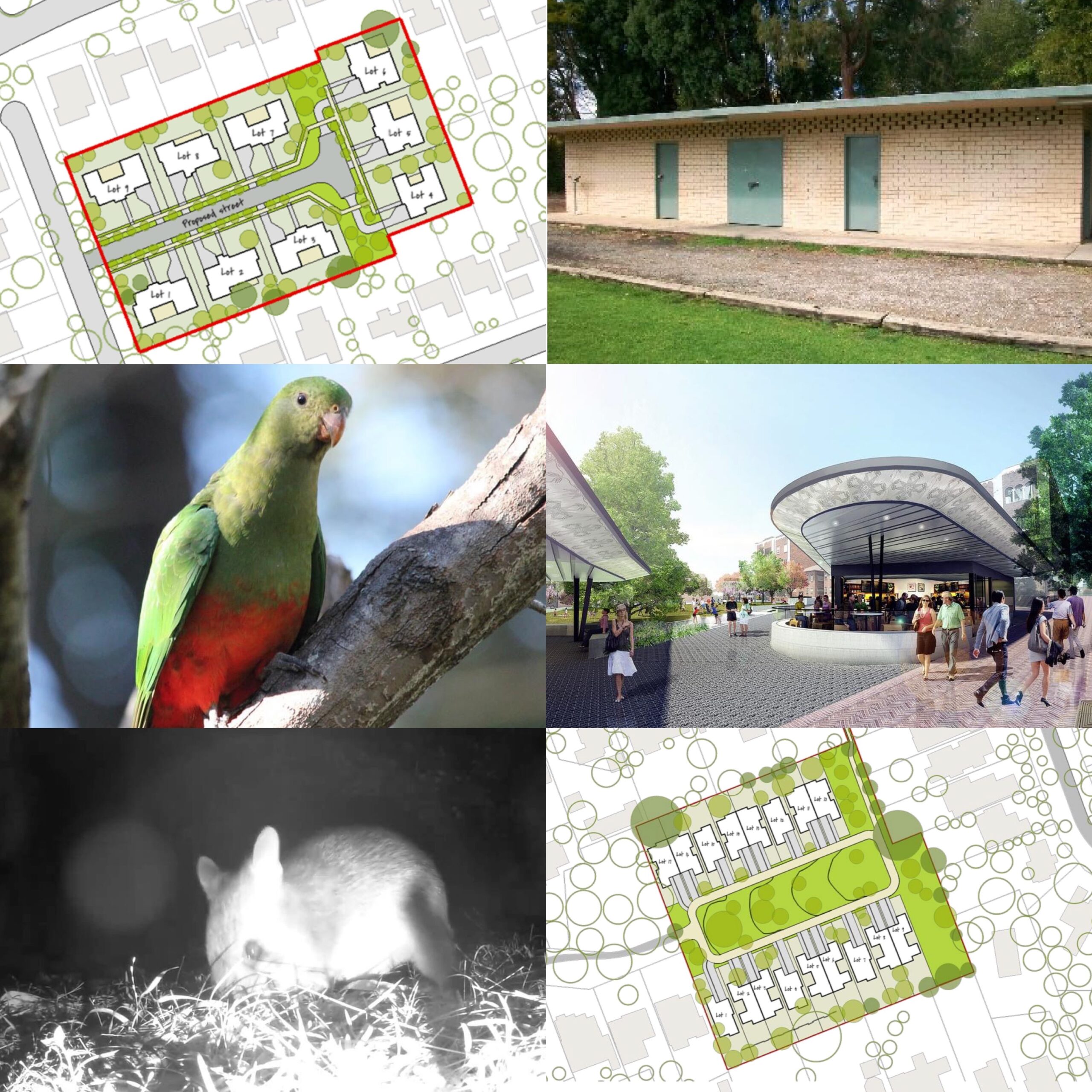 Women’s Advisory Committee – The concept is to give women the opportunity to participate in planning and improving council services, facilities, programs and projects.

Sale of Bates Park – Mixed news. The sale has been postponed by a few months while a consultant ($15-20k) further looks into the matter. I disagreed with this approach and instead proposed to just cancel the sale on the spot. That consultant money could have gone towards providing other public benefits, and during my time on council I’ve seen occasions where consultants are used to support / validate an outcome that did not reflect the reality of what local residents (including myself) have observed or experienced.

Roseville Chase and Gordon Bowling Clubs – Based on my discussions with local residents, the majority thought that starting the process to rezone and sell 21,000 sqm of public recreational land two months before an election was not a good idea. I proposed to defer the matter to the next council term and this was defeated. Instead, council will proceed with plans to rezone with a final decision to sell the land at market value likely to occur next council term. We still have some time to ponder the implications of selling public land (noting that any money gained from land sale will also theoretically be reinvested in other projects of community benefit).

Confidential Item: Lindfield Village Hub – There has been some meaningful work in this space, though due to the sensitivity of what was reported, I can’t talk about it.

Due to the spread of the COVID-19 Delta strain, the council elections have been deferred to Saturday 4 December. For more information see the links below. 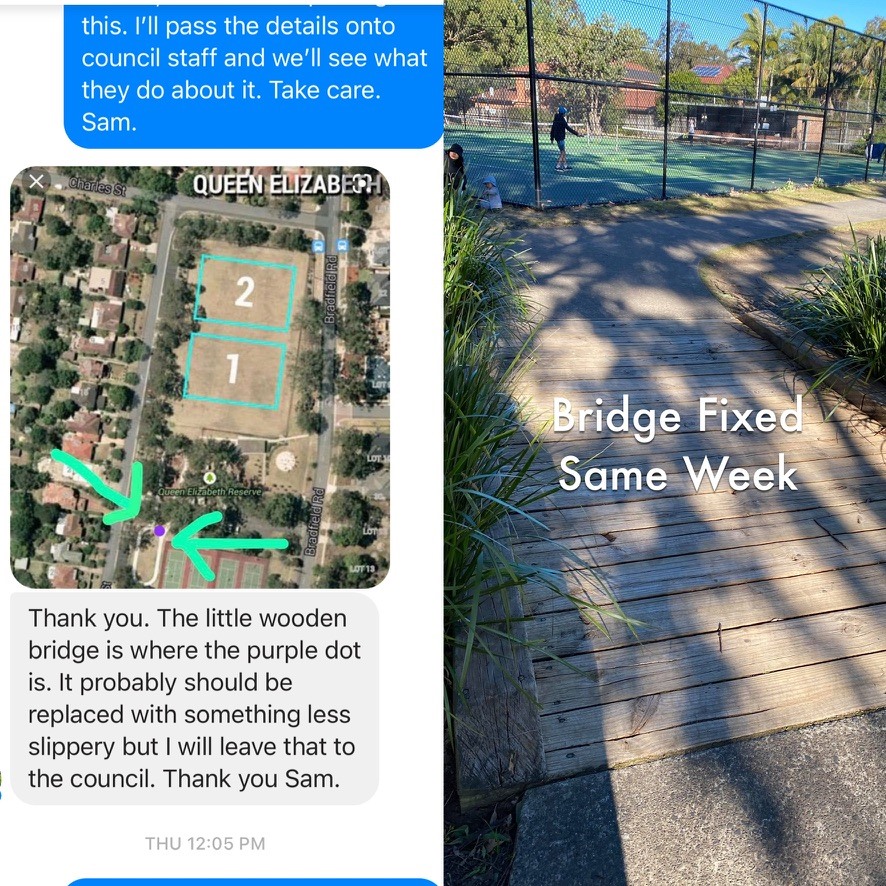 You can report issues through to council directly (kmc@kmc.nsw.gov.au / 9424 000) or reach out to one of your councillors.

When residents contact me, my usual approach is to go out to meet the resident, see the issue for myself, and discuss the likely options and outcomes. However during a lockdown it’s been more difficult and we limit the interactions to online.

In the picture provided, one of our residents reported last week that there was a slippery wooden bridge at Queen Elizabeth Reserve, West Lindfield, and that she had seen a few kids nearly slipping off their bikes and scooters.

I passed the details onto council staff and during the same week they went to the site, pressure washed the bridge, and sanded it to provide more grip.

Our resident then reported that it was much better and I passed the positive feedback back to our council staff. 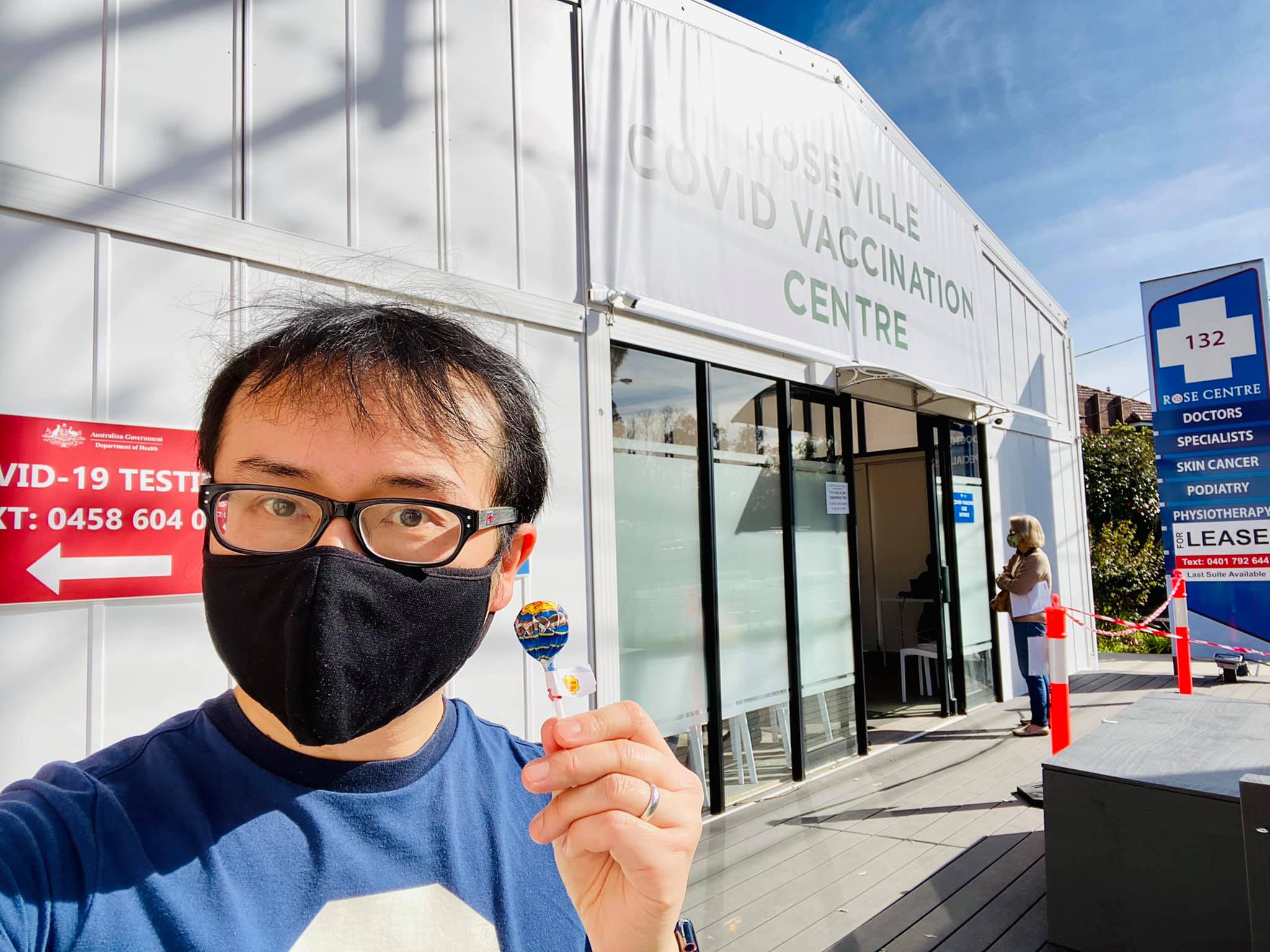 Enjoying a lollipop after my first jab. Like many other under 40’s, I’ve had to consider whether to follow ATAGI advice and wait for Pfizer or to just get AstraZeneca now. I’ve had conversations about the risks vs benefits and decided that in my particular case, it’s best to get vaccinated given that we are about to enter an election campaign. I’d imagine that other front line workers such as teachers and taxi drivers may be considering the same.

The Roseville Vaccination Centre has plenty of next day timeslots for those who want to get vaccinated with AZ, and the process was relatively quick (14 minutes). I’d encourage everyone to consider when they should get vaccinated (and get AZ if you are over 60) because the sooner that we are all vaccinated, the sooner Australia can return to normal.

If I experience any side effects such as aches, pains, or increased internet speeds I will let you know in the coming days. 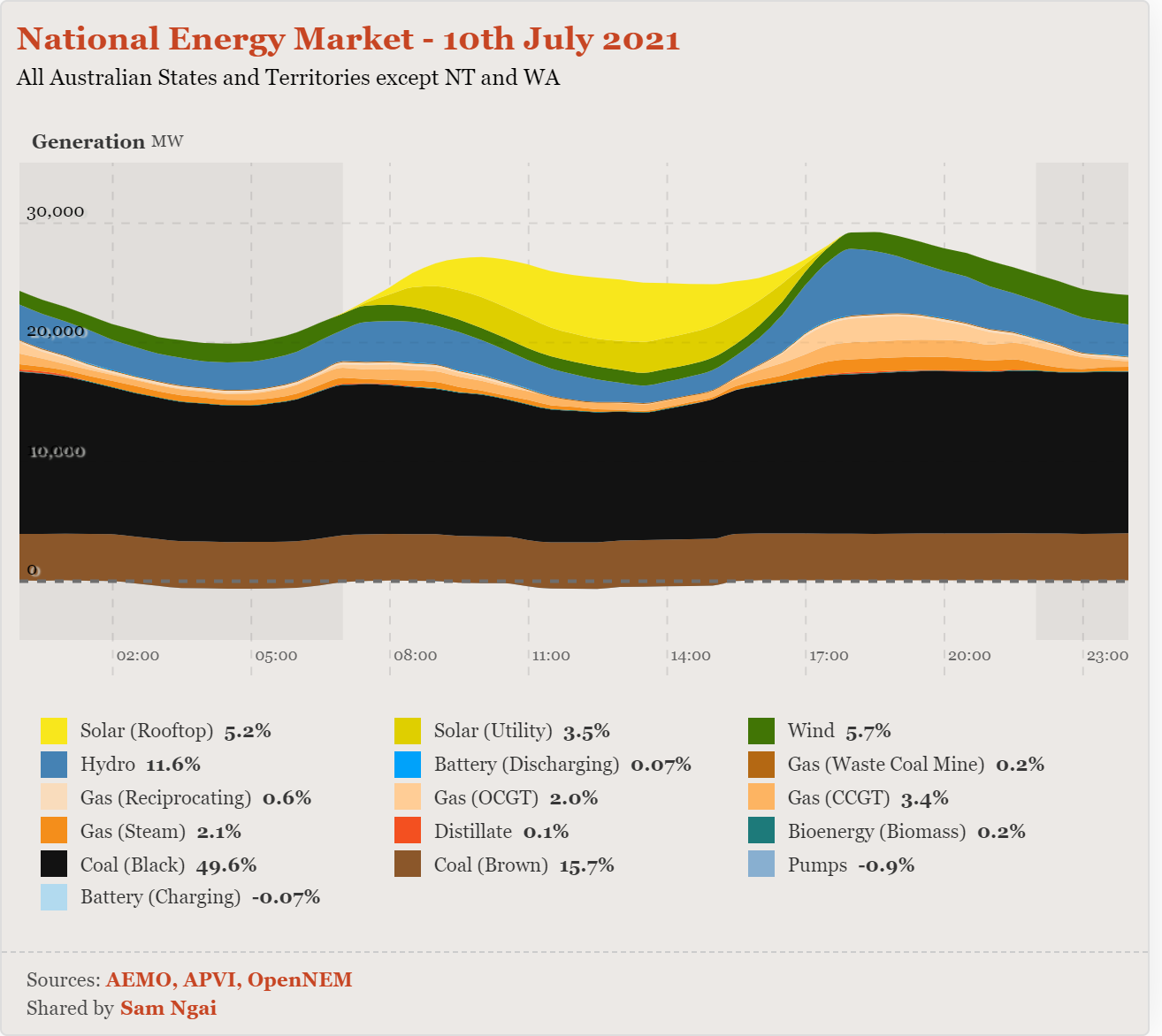 I support Ku-ring-gai’s aim for Net Zero by 2040 and 100% renewable by 2030 (aiming for 2025) but why not aim for sooner? For electricity, it helps to look at real data to understand the challenges we need to overcome to get there.

This chart depicts yesterday’s power generation and demand for the National Electricity Market (NEM) which comprises all of Australia’s States and Territories except for WA and NT.

Australia is now at a point where ☀️ renewable energy is often cheaper to produce than fossil fuels, and and there’s going to be much more market-driven investment in renewables in the coming years. Yesterday we were at 40% renewable energy at noon when the sun was brightest.

However the sun doesn’t shine at night and the wind is not always available so we can’t rely on renewable tech along to get us to Net Zero. At midnight, renewables only contributed to 17% of our needs.

So how do we access electricity at the times when we can’t reliably generate enough from renewables? In the short and medium term this comes from fossil fuels, which provided nearly three quarters of our energy needs yesterday. And in the long term we hope to plug that gap through 🔋 energy storage; we hope to generate excess energy during the day then store up enough to last through the night. That’s a lot of energy storage!

Energy storage will come through a range of technology options which we have yet to fully master including lithium, green hydrogen and pumped hydro. There are various Australian firms innovating in this space and I’m sure Australia will get to Net Zero, though not within this decade.

Having said that, Ku-ring-gai Council will get to Net Zero earlier than the rest of Australia because we are already working on specific initiatives such as improving the efficiency of our assets, street lighting and fleet while also collectively sourcing renewable energy at reduced rates with other Sydney metro councils.

There’s a lot more that can be discussed on this matter so if you’re keen I’m happy to catch up sometime. 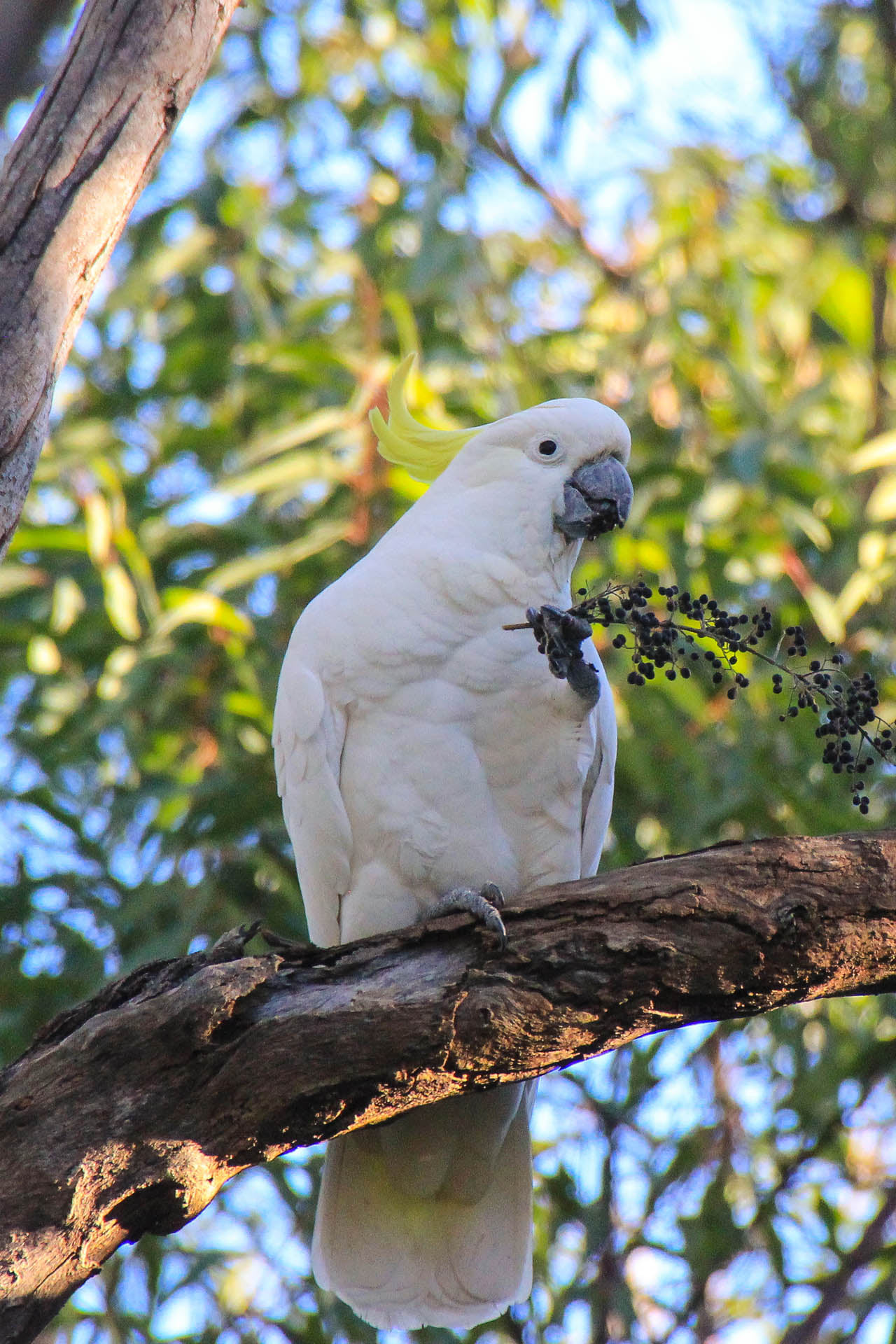 This month we are seeking to reverse a decision made by the previous term councillors to sell Bates Park (97 Babbage Road, Roseville Chase). Bates Park is a small parcel of land rich in native flora and abundant with native wildlife including Echidnae, Wallabies, endangered Bandicoots, the Powerful Owl, and a range of other native birds. Based on observations of what has happened in similar situations in the past, our concerns are that once sold there will be no effective way to protect our wildlife and that the ecological damage does not justify the tiny (and once off) financial gain.

If you agree (or disagree) with stopping the land sale there are two ways in which you can contribute.

First, in the absence of a public forum due to COVID, you can officially make an online submission either as written text or a video, to be presented to the councillors. Submissions are due Monday 12 July 2021, 5pm and further information is in the link below.

Secondly, there is also a petition organised by residents associated with saving the park. For more information see the following link.

I’d like to thank Councillor Jeff Pettett and our Deputy Mayor Cedric Spencer for their support in stopping the land sale. Without their care and support we might not have had this opportunity to even propose a reversal of our predecessors’ decision to sell.

I’d also like to thank the local residents who organised the awareness campaign on this important matter. I’ve actually wanted to reverse this decision ever since finding out about it in 2018 but it was difficult to establish a base case for reversing the decision without know that there was local support.